This guide includes anti-racist resources for personal and teaching use, picks made by the student-led group Centre for Polite Dissent, annotations by Sade Alexis, and selections by the Social Justice Working Group.

Want to make a book, film or magazine suggestion? We welcome requests for items to add to our collection. Include the author and title, and let us know why you think it is important.

Want to get in touch about something else? The library welcomes comments and suggestions about how we can improve your experience in the library or when using library resources.

Want to get in touch directly? Send us an email!

We are adding new material regularly so check back often.

O Happy Day. Directed by Charles Lofton, Frameline, 1996. (6 min.)
"O Happy Day” is a 1996 short film by Charles Lofton. Using found footage “O Happy Day” juxtaposes images of Black Panther Party demonstrations with Gay Liberation Movement protests and intertwines them all with sensual homoerotic images of black men. Punctuating the films soundtrack with a 1970 quotation from Black Panther leader Huey Newton, Lofton re-imagines an intertwining of the two movements as an expression of black queer love and power: "There's nothing to say that a homosexual cannot also be a revolutionary. Quite on the contrary, maybe a homosexual could be the most revolutionary..." If you missed seeing this when it was exhibited at Centre Pompidou, you can find it in the “Black Power Movement 1966-1975” Channel in the streaming database: Academic Video Online/Alexander St Video found in our Databases A-Z.

Ujamii Uhuru Schule : Community Freedom School. Directed by Don Amis, 1974. (9 min.)
Check out the work of the L.A. Rebellion held in the open access database of the UCLA Library Film and Televison Library! Ujamii Uhuru Schule (Swahili for Community Freedom School) is a portrait of an Afrocentric primary school located in South Los Angeles. Filmed in 1974, Don Amis’s 9 min documentary contains beautiful radical imagery and truths of what learning can mean outside of an inherently oppressive Eurocentric/white paradigm. 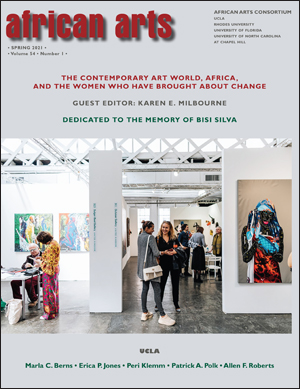 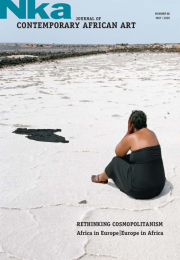 Nka focuses on publishing critical work that examines contemporary African and African Diaspora art within the modernist and postmodernist experience and therefore contributes significantly to the intellectual dialogue on world art and the discourse on internationalism and multiculturalism in the arts. Nka mainly includes scholarly articles, reviews (exhibits and books), interviews, and roundtable discussions. Published two times a year since 1994.